Driverless cars are going to radically transform the landscape of the city and suburb, but in exactly the opposite way most people believe. Instead of being the saviors of our cities, they will provide the justification for the retention and expansion of the 20th century suburban development model. They will do this because they will simultaneously solve the problem of modern road congestion while increasing the convenience with which we all move about in cars. In order to understand this, however, it helps to understand a very similar situation that unfolded almost a century ago when the new technology wasn’t driverless cars, but cars with drivers.

In the 1920’s the nascent planning profession was attempting to create a logical way to incorporate the automobile into growing cities. It’s hard to imagine but in a very early city planning report (Annual Report, City Planning Commission, 1922), issued in the City of Atlanta there were two central recommendations to do just this, transform the city to accommodate the car. The two recommendations were to widen and grade separate streets. The report states, ‘The 80-foot street with the 56-foot roadway is several times as efficient as a 60-foot street with a 40-foot roadway. A 56-foot roadway will take care of approximately twice the traffic at twice the speed as compared with the 40-foot roadway’. Further, in order to fully facilitate more and faster traffic, the report continues, ‘One of the principles of modern street planning is that where conditions are favorable there should be a separation of grades for through traffic at the intersection of two heavy traffic routes’. 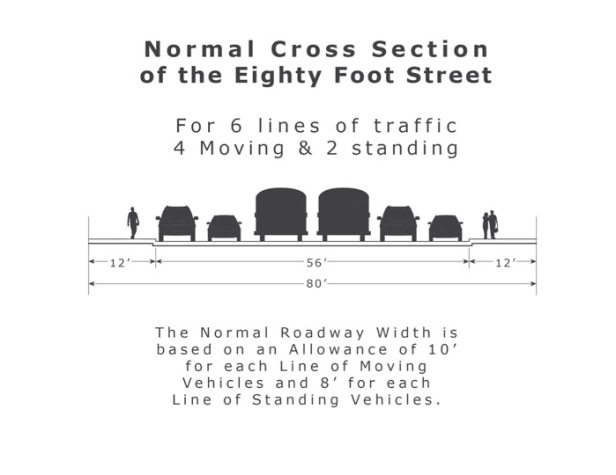 For Atlanta, as it was growing in the first half of the twentieth century, this model was tied not only to efficiency, but also to economic growth. The central hypothesis in the Report explains that if, ‘the through traffic can pass without interruption the efficiency of both streets is enormously increased. They attract more traffic which naturally makes for an increase in business values along them.’

In the nearly 100 years since the Report was issued these quasi-scientific proclamations have become the defining principles for addressing development and transportation across the globe. In 1922 the authors of the Report weren’t alone in their assertions, they were simply following the cutting-edge planning strategy of the day. But these assertions had unintended consequences that weren’t foreseen at the time. In 1922, they were seen as the way to create more robust economies in central cities, but over the coming decades the full implementation of these principles had exactly the opposite effect. The goal was to support the growth of the city, but the consequence, unintended and unforeseen, was exactly the opposite.

In 1922, when the Report was written, the entire state of Georgia had just 22,000 cars, yet even then there was a fundamental obsession with efficiency and convenience. As cars became more prevalent other modes of transportation receded. Streetcars were removed, subway construction all but stopped and bus service was significantly reduced. Every mode of transportation that required the inconvenience, or inefficiency, of walking through the city at either end of the trip was supplanted by trips in cars, reducing the need to walk to the bare minimum; walking being the least convenient way of getting around, of course. Again, using Atlanta as an example, a city that had hundreds of miles of streetcar routes in 1940 had none in 1960.

Fast forward almost 100 years from that report in 1922, and we find ourselves at a time in which the roadway has become a conduit for automobiles to such an extent that they are classified as locals, collectors and arterials, depending on the capacity of the traffic they can carry, or highways, those completely separated, limited access, high volume trunk lines, the water mains of our transportation system.

The pseudo-science of transportation engineering has completely transformed our understanding of streets and roads into something akin to pipes carrying water (bigger cross-section carries more water faster), but anyone who has been on any part of this system in any congested area knows that the ‘science’ of capacity doesn’t work. If our city water lines worked with the efficiency of our road systems we would be in serious trouble. Of course the reason for this is that water is made up of atoms and molecules and they act according to the laws of physics. Water molecules don’t have minds of their own, so engineers can very accurately predict how water will behave. Drivers on the other hand offer no such consistency. It is all but impossible to predict how all drivers will react in every possible situation. Yet we continue to design roadways as if water molecules are driving instead of newly licensed teenagers, barely mobile octogenarians and everything in between

This is where the future of driverless cars starts. They are an attractive, even inspirational, new technology. With them is the promise of extremely efficient, convenient transportation. They essentially solve all of the problems of modern transportation planning, leading the design and planning of streets and roads back to the realm of engineering, because at this point cars really will perform based on the laws of physics, or at least the laws that are programmed into every single car, whether occupied by teenager or octogenarian. The utopic vision will finally come to pass.

But the unintended consequence of this, and it is staggering, is that the entire suburban system of development, the creation of new cities based on disconnected, un-walkable road layouts will get new life because of the consistency in the way driverless cars might come to operate, and there will be little or no congestion, the original goal for those transportation planners back in the early 20th century. This has a real chance of coming to pass because, even now, we are seeing the beginnings of the millennial exodus to the suburbs, and this is with the consequence of having to sit in terrible traffic while commuting to and from work. Imagine the day when this single suburban inconvenience, traffic, is no longer a problem. What will stop people from wanting to live in the suburbs? Once again it will be cool to be on the open road. Only this time it won’t be in a ’64 Mustang convertible but an electric hyper-efficient driverless car being powered by solar energy coming from the roadway itself. And when you want that cup of coffee on the way to work, no problem, you just order it on your iPhone, which of course will be easy since you won’t be driving, and it will be perfectly prepared and ready for you at the automated Starbuck’s drive-through, where instead of waiting, inconveniently, in line with your fellow citizens, you simply breeze through, the only human interaction the hand off of the coffee at the drive-thru window. And you will continue to get fatter, more diabetic, more prone to heart disease, less social, and generally cease to be part of a larger community. The insidious thing about driverless cars is that they will make the suburban model work just well enough to relieve everyone of the grind of sitting in traffic, but driverless cars will do nothing to solve all of the other problems that models brings with it. And in many cases it will exacerbate those other problems. You will no longer have to even walk from the parking lot to the front of the building because a driverless car will drop you off right at the door of the shopping mall, or the suburban office building or, well, that’s really all there is out there. And yes, the space for parking might get more efficient because cars, driverless now, and needing much less storage space, will free up all that parking for space to build new buildings, new buildings that are accessible only by car. But at least it will all be convenient.

This may seem a vastly over-simplified and an over-reaction to something that has the power to transform our lives for the better. But 100 years ago, we also had a technology that was going to do exactly the same thing. As reactionary as this may seem, it does beg the question; shouldn’t these possible side-effects be contemplated?

Cars are great things. In fact they should always be an integral part of any street and are part of what makes cities vibrant. Streets should only be devoid of cars when absolutely necessary and absolutely beneficial. But streets also need people on them, and buildings and parks and other things you can walk to on these streets that make great cities. Great cities are never made from roads. They are made from streets, but driverless cars have the very real potential to render the street obsolete, and that is the devastating unintended consequence of this potentially fantastic new technology.

6 thoughts on “Driverless Cars; How They Will Kill the City and Save the Suburbs”